Once known as Koap Fireslinger, now known only as Gobbo.

This goblin was born like many other goblins. Shortly after he was born, he was thrown into a holding pin with all the other young goblins and was left to fend for himself. Only given scraps occasionally, he was forced to eat and drink whatever he could find, which occasionally included the younger and weaker goblin young in the cage. Just before Koap Fireslinger, as he was called then, was big enough to escape the pin, a group of slavers swept through his tribe, killing many of the tribe, especially those that resisted, and capturing the young.

Koap, being smarter than the average goblin, kept his head down and bided his time to escape. While the young goblins were on display for people to inspect and bid on, Koap carefully picked the locks holding him in place and started to sneak away, however he was quickly caught and punished. These escape attempts happened several more times, before the slavers beat him within an inch of his life, before placing him back to where he was. Eventually Koap was bought by someone, who saw his many escape attempts as a positive.

Koap’s new master spent much of his time making Koap into the perfect servant. Koap resisted the best he could, but eventually he broke and started to do as his master commanded. After the master was pleased with Koap and trusted that he wasn’t going to try to escape or kill him, the master started to send him to gather materials. After years of the master calling out, “Gobbo, go do this” and “Gobbo, do that!” and being thoroughly broken, Gobbo wanted nothing more than to please his master and started to learn some basic alchemy, in order to assist his master further in pursuits.

One day, the master decided to break off a deal with a mysterious woman, thinking that she was simply a crazy lady and not anyone that could do anything about it. The master was greatly mistaken on who he was dealing with and paid the ultimate price for his arrogance. Gobbo, upon returning from a task the master sent him on, looked upon the broken body of his master and the mysterious woman who killed him. Seeing little other options, he immediately placed himself in her service and since has faithfully served his new Mistress. 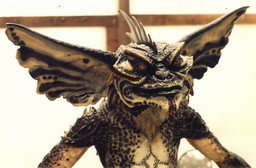