"I was born in darkness; I am a childe of the night"

────┤ Vampire Template Features ├────
Attack: A vampire retains all the attacks of the base creature and
also gains a slam attack if it didn’t already have one
Special Attacks: A vampire retains all the special attacks of the base
creature
Blood Drain (Ex): A vampire can suck blood from a living victim with its
fangs by making a successful grapple check. If it pins the foe, it drains
blood, dealing 1d4 points of CON drain each round the pin is maintained.
On each such successful attack, the vampire gains 5 temporary hit points
Children of the Night (Su): Vampires command the lesser creatures of the
world and once per day can call forth 1d6+1 rat swarms, 1d4+1 bat swarms,
or a pack of 3d6 wolves as a standard action. These creatures arrive
in 2d6 rounds and serve the vampire for up to 1 hour
Dominate (Su): A vampire can crush an opponent’s will just by looking onto
his eyes. This is similar to a gaze attack, except that the vampire must
use
a standard action, and those merely looking at it are not affected.
Anyone
the vampire targets must succeed on a DC28 Will save or fall instantly
under the vampire’s influence as though by a dominate person
spell (CL 12th). The ability has a range of 30 feet
Create Spawn (Su): A humanoid or monstrous humanoid slain by a
vampire’s energy drain rises as a vampire spawn 1d4 days after burial
Energy Drain (Su): Living creatures hit by a vampire’s slam attack (or any
other natural weapon the vampire might possess) gain two negative levels.
For each negative level bestowed, the vampire gains 5 temporary hit
points.
A vampire can use its energy drain ability once per round
Alternate Form (Su): A vampire can assume the shape of a bat, dire bat,
wolf,
or dire wolf as a standard action. While in its alternate form, the
vampire loses
its natural slam attack and dominate ability, but it gains the natural
weapons
and extraordinary special attacks of its new form. It can remain in that
form until it assumes another or until the next sunrise
Damage Reduction (Su): A vampire’s natural weapons are treated as magic
weapons for the purpose of overcoming damage reduction
Fast Healing (Ex): A vampire heals 5 HPs each round so long as it has at
least
1 HP. If reduced to 0 HP in combat, it automatically assumes gaseous form
and attempts to escape. It must reach its coffin home within 2 hours or
be
utterly destroyed. (It can travel up to nine miles in 2 hours.) Any
additional
damage dealt to a vampire forced into gaseous form has no effect. Once
at rest in its coffin, a vampire is helpless. It regains 1 HP after 1
hour, then
is no longer helpless and resumes healing at the rate of 5 HPs per round
Gaseous Form (Su): As a standard action, a vampire can assume gaseous
form at will as the spell (CL 5th), but it can remain gaseous
indefinitely
and has a fly speed of 20 feet with perfect maneuverability
Spider Climb (Ex): A vampire can climb sheer surfaces as though with
a spider climb spell
Turn Resistance (Ex): A vampire has +4 turn resistance
Feats: Vampires gain Alertness, Combat Reflexes, Dodge, Improved Initiative,
and Lightning Reflexes, assuming the base creature meets the
prerequisites and doesn’t already have these feats

────┤ Class Features: Sorcerer (P) 14th ├────
Weapon & Armor Proficiency: Sorcerers are proficient with all simple
weapons. They are not proficient with any type of armor or shield. Armor
interferes with a sorcerer’s gestures, which can cause spells with
somatic components to fail
Concentration check: 1d20+25
Cantrips: cast your Cantrips at will
Bonus Feat: Eschew Materials
Sorcerer Bloodline: Aberrant
• 2x BloodLine Feats
• Class Skill: Knowledge: Dungeon
• Bloodline Arcana: 50% duration for spells of the Polymorph school,
minimum +1 round. Does not stack with the ‘Extend Spell’ feat
• Bonus Spells known: enlarge person (3rd), see invisibility (5th),
tongues (7th), black tentacles (9th), feeblemind (11th), veil (13th)
• Acidic Ray (Su): 14/day, as a std action, fire an acidic ray within 30’
as a ranged touch attack, which deals 1d67 acid damage
< OOOOOOOOOOOOOO
• Long Limbs (Ex): Your reach increases by 10’ whenever you are making a
melee touch attack. This does not increase your threatened area
• Unusual Anatomy (Ex): Your anatomy changes, giving you a 50% chance of
ignoring any critical hit or sneak attack scored against you

────┤ Class Features: Wizard (P) 14th ├────
Weapon & Armor Proficiency: Wizards are proficient with the club, dagger,
heavy crossbow, light crossbow, and quarterstaff, but not with any type
of armor or shield. Armor interferes with a wizard’s movements, which can
cause his spells with somatic components to fail
Concentration check: 1d20+22
Cantrips: cast your Cantrips at will
Bonus Feat: Scribe Scroll
Arcane Bond (Sp): Bonded Object: <name>
• Free object of Masterwork quality gained at first level
• Must be worn or wielded to have an effect
• If you attempt to cast a spell without your bonded object worn or in
hand, you must make a DC 20 + spell’s level concentration check or lose
spell
• 1/day, use bonded object to cast any spell from your spellbook, even if
the spell is not prepared. This spell cannot be modified by metamagic
feats or other abilities, nor be from your opposition schools (if any)
Arcane School: Teleportation. Prohibited: Divination, Enchantment
Summoner’s Charm (Su): Increase the duration of summonnings by 7 rnds
Shift (Su): 11/day < OOOOOOOOOOO > As a swift action, teleport to a nearby
space as if using ‘dimension door’. This movement does not provoke an
AoO. You must be able to see the space that you are moving into. You
cannot take other creatures with you when you use this ability (except
for familiars). You can move up to 35’
Dimensional Steps (Su): You can teleport up to 420’ per day as a standard
action. This teleportation must be used in 5’ increments and such
movement does not provoke an attack of opportunity. You can bring other
willing creatures with you, but you must expend an equal amount of
distance for each creature brought with you

────┤ Description for the Magical Items Worn ├────
Headband of Inspired Wisdom 6: +6 enhancement bonus to Wisdom
Mask of the Faceless: See in Darkness ability, Goz mask-like, Hat of
Disguise; melds onto wearers face
The Dark Heart: Helps resist Vampiric Hunger, Constant Protective Penumbra
effect
Ring of Delayed Doom (9 stone): Delays effects of failed save for 1
min./stone
Ring of Counterspells: Counters a single spell that is cast into it
Belt of Incredible Dexterity +6: +6 enhancement bonus to Dexterity
Cloak of Deniability: +5 resistance bonus on all saves, Immune to detect
thoughts, discern lies and discern alignment, hidden extradimensional
spaces as per Handy Haversacks
Bracelet of Second Chances: This bracelet is adorned with seven coral beads
carved in intricate designs. When a critical hit or sneak attack is
confirmed on you, as an imm. action before damage is rolled, you can
choose to convert the critical hit into a normal hit. Each time you
negate a critical hit or sneak attack in this manner, one bead shatters.
When all seven are used up, the bracelet itself crumbles into powder
Circlet of Whispering Thoughts: ’6 enhancement bonus to Intelligence
• Speak Protean, Druidic and Drow Sign Language while wearing this
headband; Helm of Telepathy
Travelling Sanctum: Small adamantine case with air hole access to an
extradimensional space 10′×10′×6′ deep complete with an ornate coffin;
provides total cover to anything inside. Hardness 20, HPs 13.
Blessed Book: Fill the 1,000 pages without paying the 100 gp per page
material cost
Rod of Metamagic: Extend: Can cast 3 spells of 6th lvl or lower per day
using Extend Spell

Elves born beneath the full moon are often blessed by Sehanine as dreamers and prophets. Elves born during the day are thought to be smiled upon by Corellon Larethian himself. I was born beneath the new moon, in darkness, and in hindsight my fate was cast in shadow from the very beginning.

My mother was the wife of a wealthy elven merchant in the free city of Greyhawk and was overjoyed when she became full of child. Despite being as the full moon with me, she enjoyed attending theatrical plays while my father was away on business trips to neighboring cities. One evening, as she was returning from a late show, she felt my presence strongly and knew that I would be born soon. So distracted was she that hurrying home to lay down, she did not notice the shadow that stalked her through the streets. As she took a short cut through a dark alley she was beset upon by a night horror who bit her and drank of her blood. Only a few days later did my father return to our home to find her pale and weak, yet about to give birth. In her weakened condition she did not survive my emergence into this world, and the new moon gave no bright light to guide my arrival.

My father was heart broken at her loss and although he attempted to raise me to take over the family business, I was an unruly child with a deep brooding nature. Certainly, I was not a normal, elven lad. I was pale and shunned the light. I seemed to bring ill luck to my father’s business and he began to lose trade routes whilst long acquired allies shunned him. He was at his wit’s end what to do with me when fortunately one of his remaining friends and business partner, the Margravine Leylaura, offered to mentor me as her apprentice. It was short years into my apprenticeship when I heard my father was slain in a robbery and the kindly Margravine took me into her household.

After many years of study under Mistress Leylaura, I learned that I was Dhampir – a mortal tainted by the creature of the night that bit my mother so many years ago. Such a curse was little understood and I suffered much distrust and hatred because of it. When people learned of my birth, they called me a monster, mockingly waved sunrods at me, and pelted me with cloves of garlic. Such cruelty from those who professed to be the ‘good’ ones was ironic; who was really the monster? I spent many years in the ivory tower of Leylaura’s protection, studying magic and assisting her with her creations. Then, on one fateful day – my ill fate descended upon her as well.

When I returned from a shopping trip, I found the manor in ablaze and in shambles, many servants slain, and the evidence of violence was everywhere to be seen. My mistress, the kind lady who took me in when I was in need, I found beheaded in her bed with a stake in her heart and a note of such vehemence, such racism, I shall not repeat it. Those who bore me such loathing were sending me, and anyone who would show me kindness, a message. There was nothing left for me in Greyhawk after that dark night. As her only heir, I availed myself of what possessions were left in the house and turned and walked away to find nepenthe in a wanderer’s life.

It has been many decades since that day and my longevity, born of elf and dark creature’s curse, has seen me through trials and tribulation. Perhaps one day, I shall find companions and a cause that can see past my ill-fated heritage. Perhaps one day. I cannot change nor lift the onus of what I am; I can only embrace it and move along in the world. I was born in darkness. I am a childe of the night. 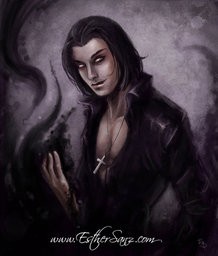